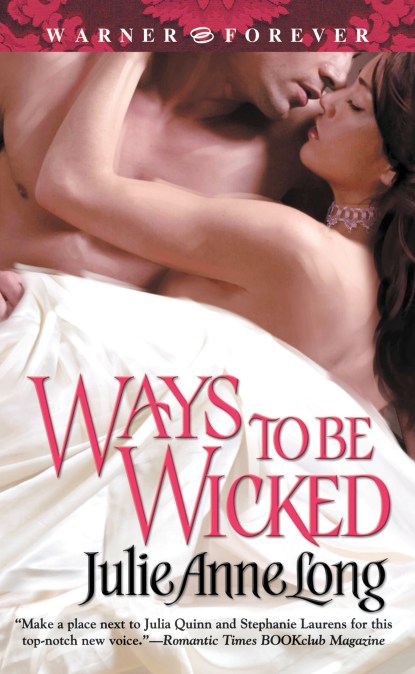 Ways to Be Wicked 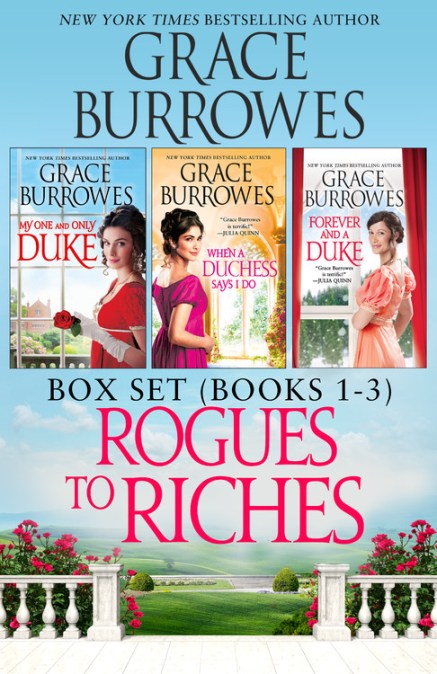 by Grace Burrowes
Enjoy the first three books in this bestselling Regency romance series about the highly unconventional Wentworth family.
My One and Only Duke
London banker Quinn Wentworth is facing execution. So when widowed and pregnant Jane Winston crosses his path, Quinn offers her marriage as a way to provide for her child. Neither thinks they’ll actually have a future together, until Quinn is declared the long-lost heir to a dukedom-and set free. Are they doomed from the start or destined for a happily-ever-after?
When a Duchess Says I Do
Duncan Wentworth has vowed to never again try his hand at rescuing a damsel in distress-until he meets the beautiful, bewildering woman hiding in the woods of his estate. Widowed duchess Matilda Wakefield can’t entrust Duncan with her secrets without embroiling him in her problems, but neither can she resist the honorable, brilliant man offering her his aid. Falling into Duncan’s arms is a distraction Matilda can’t afford-or they’ll both pay the price.
Forever and a Duke
Wrexham, Duke of Elsmore, is on the verge of social catastrophe. And as much as Eleanora Hatfield would like to avoid titled gentlemen, she has no way to refuse when the duke seeks her help. Only what starts as an unwanted assignment soon leads to forbidden kisses and impossible longings. But as Ellie begins to untangle the severity of Rex’s plundered finances, the clearer it becomes their passion cannot lead to anything other than heartbreak. 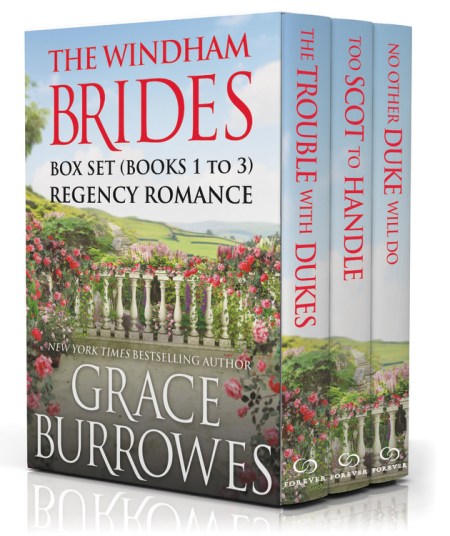 The first three books in this New York Times bestselling Regency romance series are now in a special collection perfect for binging and hailed as “terrific” by Bridgerton author Julia Quinn.

THE TROUBLE WITH DUKES:
They call him the Duke of Murder. The gossips whisper that the new Duke of Murdoch is a brute, a murderer, and even worse–a Scot. They say he should never be trusted alone with a woman. But Megan Windham sees in Hamish something different, someone different.

TOO SCOT TO HANDLE
As a captain in the army, Colin MacHugh led men, fixed what was broken, and fought hard. Now that he’s a titled gentleman, he’s still fighting — this time to keep his bachelorhood safe from all the marriage-minded debutantes. Then he meets the intriguing Miss Anwen Windham. Anwen is amazed at how quickly Lord Colin takes in hand a pack of rambunctious orphan boys. Amazed at the thrill she gets from the rumble of his Scottish burr and the heat of his touch. But she doesn’t know Colin has enemies who will stop at nothing to ruin him and anybody he holds dear.

NO OTHER DUKE WILL DO
Julian St. David, Duke of Haverford, has a long-term plan to restore the family finances, but his sister has a much faster solution: host a house party for London’s single young ladies and find Julian a wealthy bride. Elizabeth Windham has no interest in marriage, but a recent scandal has forced her hand. As the two spend more time together, their attraction is overwhelming, unexpected… and absolutely impossible. With meddling siblings, the threat of financial ruin, and gossips lurking behind every potted palm, will they find true love or true disaster? 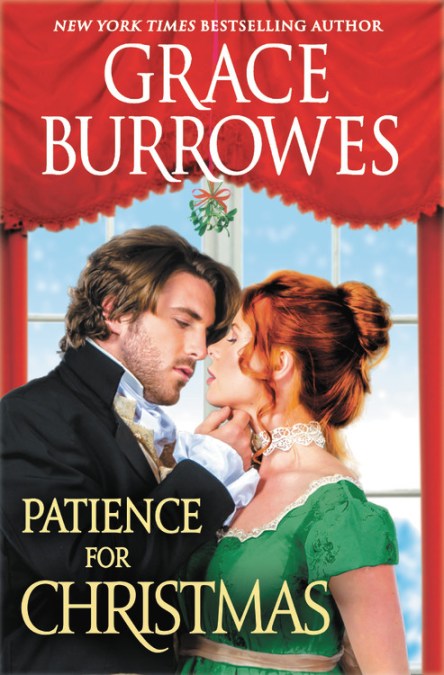 by Grace Burrowes
A friendly holiday competition turns steamy in this Regency romance novella from the New York Times bestselling author of My One and Only Duke.

Previously published in Virtues of Christmas. Advice columnist Patience Friendly’s relationship with her stubborn, overbearing publisher, Dougal MacHugh, is anything but cordial. Dougal challenges Patience to take on a rival columnist in a holiday advice-a-thon, and sparks fly clear up to the mistletoe hanging from every rafter. Will Patience follow the practical guidance of her head or the passionate advice of her heart?

A Countess by Chance

A gambler’s daughter, Sophia Weatherby knows her way around a deck of cards. So when her family estate becomes threatened, she has no choice but to use her skills at the gaming tables to save herself from ruin. A lavish house party affords her the perfect opportunity-until the newly minted Earl of Huntington arrives. Adam Greyson has never forgotten the day Sophia rejected his proposal. Now to even the score, he challenges her to a shocking wager-his two thousand pounds against the one valuable commodity she has left: her virtue. 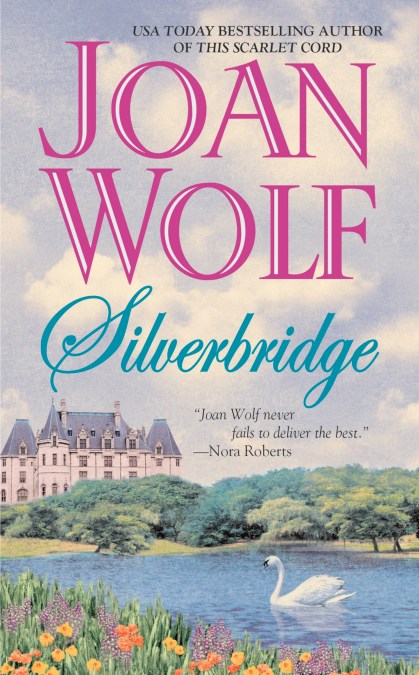 by Joan Wolf
“Joan Wolf writes with an absolute emotional mastery that goes straight to the heart.” -Mary Jo Putney

Starring in the role of a lifetime, Tracy Collins goes on location to film a movie set amid the elegance of Regency England. Here, on the lush, sprawling estate of Silverbridge, the American actress is caught between the clashing egos of cast and crew…and undeniably intrigued by Harry Oliver, the devastatingly attractive lord of the manor. Then Tracy begins to have startling visions from the past, more menacing than the dramatic scenes she enacts for the camera. Suddenly, terrifying acts of sabotage and attempted murder-all too real and very much in the present-threaten her and Harry. At stake is a legacy too precious to lose…and a love as fragile as a dream foretold long ago. 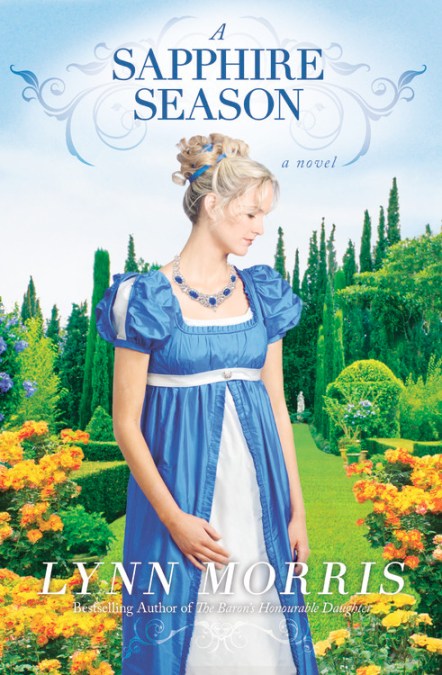 Lady Mirabella Tirel, the beautiful daughter of the Marquess of Camarden, takes a practical approach to love since a dashing captain broke her heart at age 17. Now at almost 22 years old, she has decided to endure one last London season to secure a suitable engagement and begin a simple life in the country.

Sir Giles Knyvet is Mirabella’s oldest friend and her most dependable ally, and he is also secretly in love with her. Yet he knows the prospect of a relationship is doubtful: Besides being a mere baronet, he aims to settle a large family debt before sharing his feelings with her. But as Mirabella draws close to a suitable match, Giles may need to interfere to buy himself more time. 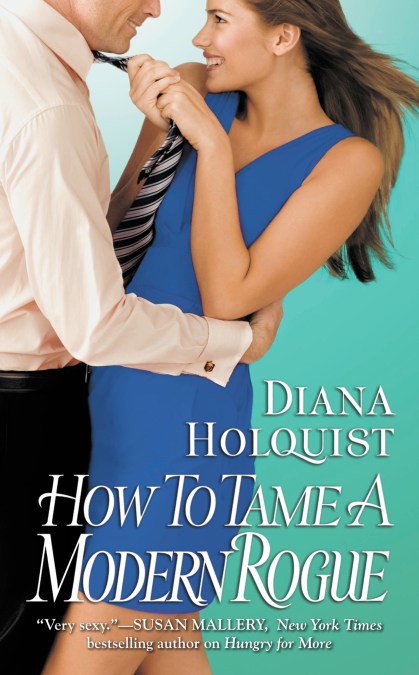 How to Tame a Modern Rogue

by Diana Holquist
Commitment-phobic Sam Carson has only dated model-gorgeous women. But one stolen kiss from a plain-Jane schoolteacher and he’s hell-bent on stripping away her floral dresses and teaching her the art of being bad. If only her good-girl ways didn’t make him want to be a better man . . .

Ally Giordano is at the end of her rope. Her beloved grandmother actually believes that she’s living in her favorite romance novel in Regency England and Ally doesn’t have the heart to set her straight. But now Granny Donny’s last wish is for a retreat to the country and Ally can’t refuse her…until she demands that Sam accompany them. And though his smiles turn her knees into jelly, Ally knows better than to trust a playboy…and she definitely knows better than to try to change one. Or does she? 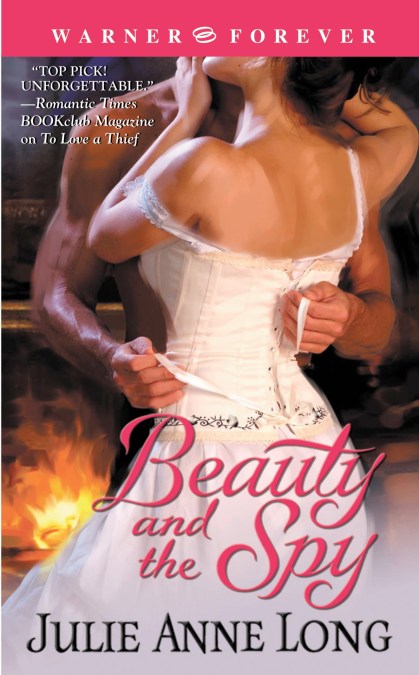 Beauty and the Spy

by Julie Anne Long
When a sly London belle and His Majesty’s best spy cross paths, sparks fly in this sensual Regency romance of espionage, scandal, and secrets.
SHOCKING! London’s belle of the ball, Susannah Makepeace, is the last person who should suddenly be stuck in the sleepy village of Barnstable. In town, she would never have seen a man swimming naked in a pond. And she certainly would have resisted the urge to draw every single bit of him in astonishing detail! SIZZLING! Very few people know that Viscount Kit Whitelaw is the best spy in His Majesty’s secret service. But his high-flying life has finally banished him from London.
Not to worry — if Susannah’s erotic sketches are any indication of her nature, she’ll be a delicious stand-in for the thrill of espionage. SCANDALOUS! When odd accidents follow in Susannah’s wake, Kit’s spy senses start tingling. For what better mystery is there for England’s greatest spy than the secrets of the delectable puzzle that is Susannah? 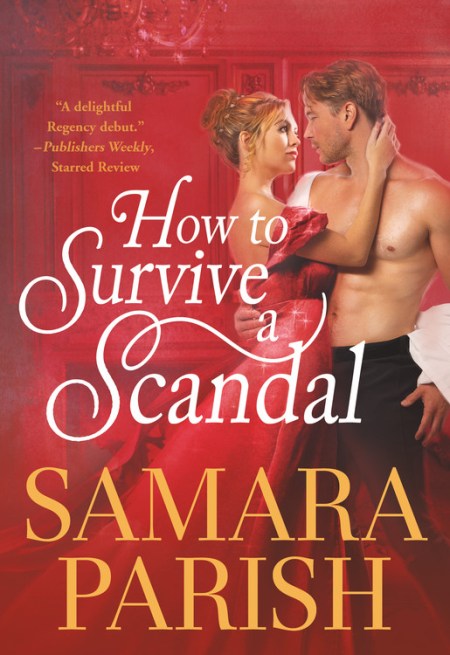 How to Survive a Scandal

by Samara Parish
In this whirlwind regency romance, perfect for fans of Netflix's Bridgerton, a near-death experience leads to a marriage of convenience for two unsuspecting strangers, but will their unusual meeting lead them to true love?

Lady Amelia was raised to be the perfect duchess, accomplished in embroidery, floral arrangement, and managing a massive household. But when an innocent mistake forces her and the uncouth, untitled Benedict Asterly into a marriage of convenience, all her training appears to be for naught. Even worse, she finds herself inexplicably drawn to this man no finishing school could have prepared her for.

Benedict Asterly never dreamed saving Amelia’s life would lead to him exchanging vows with the hoity society miss. Benedict was taught to distrust the aristocracy at a young age, so when news of his marriage endangers a business deal, Benedict is wary of Amelia’s offer to help. But his quick-witted, elegant bride defies all his expectations . . . and if he’s not careful, she’ll break down the walls around his guarded heart. 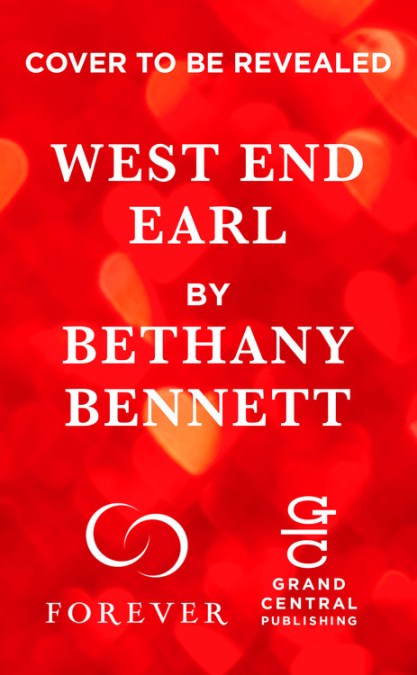 by Bethany Bennett
From the series guaranteed to "win the hearts of Regency fans” comes a story of secret identities, unlikely love, and forbidden romances that will warm even the coldest of hearts (Publishers Weekly).

While most young ladies attend balls and hunt for husbands, Ophelia Hardwick has spent the last ten years masquerading as a man. As the land steward for the Earl of Carlyle, she’s found safety from the uncle determined to kill her and freedoms a lady could only dream of. Ophelia’s situation would be perfect—if only she wasn’t hopelessly attracted to her employer.

Calvin, Earl of Carlyle, is determined to see his sister married this season. And he’ll do it with the help of his trusted right-hand man. But when he finds out his man is a woman, and that her life is in danger, his priorities change. Their attraction is passionate, all-consuming, and if they aren’t careful, it could turn downright deadly—for both of them. 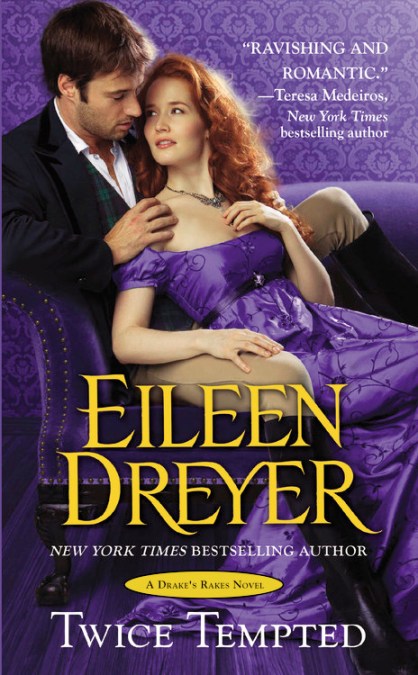 It feels like a lifetime ago that Alex Knight saved Fiona from certain doom . . . and stole a soul-shattering kiss for good measure. Wanting nothing more than to keep her safe, he left her in the care of her grandfather, the Marquess of Dourne.

But Fiona was hardly safe. As soon as he could, the marquess cast her and her sister out on the streets with only her wits to keep them alive.

Alex has never forgotten that long-ago kiss. Now the dashing spy is desperate to make up for failing his duty once before. This time he will protect Fiona once and for all, from a deadly foe bent on taking revenge on the Ferguson line-and anyone who stands in the way . . .
Next Page