Name: Travis Blake
Profession: Army Veteran/Rancher
Location: Big Verde, Texas
Height: A little over six feet without my boots. I was a late bloomer, so I’m always surprised when I look in the mirror.

If your best friends had to pick four words to describe you, what would they pick?

Ha! Since I know you’re not actually going to ask them, let’s go with smart, handsome, witty, and charming.

What are you passionate about?

My family and community. I didn’t have much of either growing up, so I appreciate them a little more than the average guy.

If it’s basketball season and there’s a game on, I’ll be in front of the TV.  If not, you’ll probably find me on my porch with a cold beer, watching a beautiful Texas Hill Country sunset or checking out the constellations while the frogs and crickets sing me a song. I’m not much for warming a bar stool (my dad did a little too much of that) or fancy parties and whatnot.

What are three things you enjoy doing in your free time?

Free time? I’ve got a five-year-old giving me fits and a herd of cattle hellbent on busting through my fences to get to the neighbor’s apple orchard.  You’re killing me with this “free time” talk.

What’s the last song you listened to? Favorite book?

It was an oldie but goody by Sam the Sham and the Pharaohs – Little Red Riding Hood. It’s kind of sexy, especially if you recently went to a Halloween party as the Big Bad Wolf (which I reluctantly did).

If you could go back in time and change one thing in your life, what would it be?

I hid behind a mask once, and I don’t mean that metaphorically. It was at that Halloween party I mentioned earlier. If I could do that night over again, I’d leave the mask in the pickup truck.

What are you looking for in an ideal mate?

Lord knew Travis wasn’t the kid he’d been in high school—that skinny, short boy who’d helped her clean up the cow patty mess…Although when she looked in those blue eyes behind the lenses of his glasses, it was obvious at least part of him was still that sweet boy.

“I recognized you as soon as I saw you tonight,” she blurted.

Travis sat up and inhaled sharply, as if bracing himself for an onslaught of high school memories. “I was going to tell you,” he stuttered. “I wasn’t sure you’d recognized me with the beard, and I thought maybe it was best to just not say anything. It’s kind of embarrassing, isn’t it?”

“High school is supposed to be embarrassing,” she said. “It was the glasses that gave you away.”

“Ho Ho Ho Green Giants!” She winced. That had come out of nowhere with comedic timing.

Travis stared at her as if she were performance art. Maybe she was. “Do you recognize me?” she asked.

He frowned at her. “Is this a trick question?”

“Aw, you don’t, do you? Does a cow patty cleanup outside a locker ring a bell?”

Travis looked beyond confused. His blue eyes searched hers, and she did her best to look like fourteen-year-old Maggie, which wasn’t nearly as difficult as it should have been. Then his eyes widened, and a huge grin broke out on his face. “I do remember you! I knew we’d gone to school together, but you were a couple of years behind me. And I really didn’t have any friends…”

He blushed, and it broke her heart.

“Anyway, you were the Future Farmers of America girl that hung out with all the redneck boys.”

“I think that’s what it says beneath my unfortunate yearbook photo.”

“You had a nickname. What was it?” He rubbed his beard.

“Mighty Mack,” she said. “And I’m trying really hard to outgrow it.”

His eyes left hers and traveled down her face to the rest of her, and even though she was wearing what amounted to a blanket with a zipper, his voice deepened, and he said, “Oh, I’d say you’ve outgrown it. There is nothing remotely childish about you, Maggie Mackey.”

Maggie could swear her ears were bathing the room in a rosy glow.

Travis’s eyes worked their way back up to her lips, where they settled, making Maggie’s heart pound in her chest. “I recognize you,” he whispered.

All he’d said was that he recognized her. But it felt as if he’d said, You’re mine. 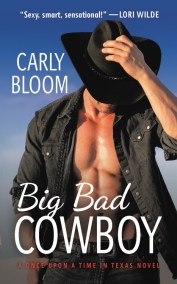 One of Publishers Weekly's Best Books of 2018! After one too many heartbreaks, Travis Blake hung up his cowboy hat and put Big Verde, Texas, behind him. But when he gets the call that his young nephew needs him, he knows he has to return home. His plan is to sell the family ranch and hightail it back to Austin, but there's a small problem: the one person who stands in his way is the one person he can't resist. Maggie is pretty sure she hates Travis Blake. He's irritating, he's destroying her business, and . . . and he's just so frickin' attractive. But when they're forced to work together, Maggie discovers that the Most Annoying Man in the World is more than he seems. He's sweet with his nephew, he helps out in the community, and he makes her heart flutter. Maggie doesn't want to risk everything on a man who wants to leave, but what if she can convince this wayward cowboy to stay?